New LG Chem RESU Prime storage applications will come in two versions: LG Chem RESU10H Prime and LG Chem RESU16H Prime. As the names suggest, there is a capacity of 9.6 kWh and 16 kWh behind it. The power is at 5 kW and at its peak 7 kW for the smaller version and at 7 kW and 11 kW at the peak for the larger one.

A system can be connect in parallel for more capacity but unfortunately it cannot be mixted here, 10H should be connected with 10H only and 16H with 16H accordingly.

The parallel up to a 2 (two) x LG Chem RESU16H Prime battery sets connection  adds up to 14 kW power and of 32 kWh capacity.  For single-family houses in particular, this capacity is good enough to keep self-consumption high to power both lives and careers.
The shift to a work-from-home culture has highlighted increased demand for reliable energy solutions, driven by the uncertainty created from increased blackouts and the inefficiencies of aged grid systems. The LG RESU Prime offers consumers a of self-reliance, in an intuitive format they can scale to meet their needs

LG Chem RESU10H / 16H Prime battery set consists of two Battery modules and a Control unit – the brain of the memory with the BMS and the electronics. The Battery modules weigh 41 kg / 65 kg each, Control unit 25 kg., so it probably enough two people for the installation on a Base connect plate.

A major advantage of the new product generation is the integration of a CAN and RS485 interface. This means that inverters that communicate with CAN as SMA, Sungrow and GoodWe inverters can be operated on the same battery.
The LG Chem RESU Prime monitoring is also new – free access to the storage system via app or via the internet browser.
The Prime batteries have a converter that enables them to operate with high-voltage battery inverters:

With protection class IP55, you can easily install the system outside the house, e.g. in the garage, as long as the temperature does not drop below -10 degrees. Attention: At lower temperatures, the BMS switches itself off and you have to switch it on again.

The New LG Resu Prime home energy storage series is a new generation of storage system that is made for increasing energy requirements, and with an ideal capacity for high self-consumption in single-family homes 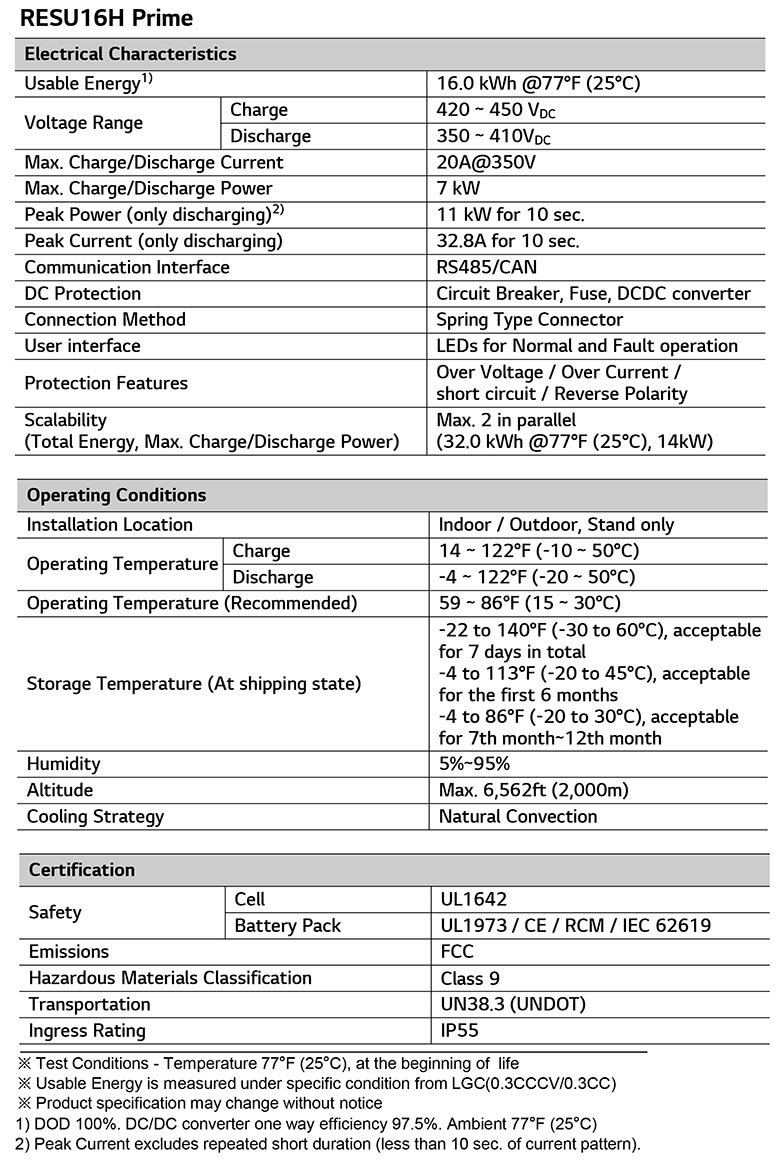